Collaboration of the anime "Girls und Panzer" and World of Tanks

On April 21, version 1.12.1 is released. We have improved the sniper mode settings for tank destroyers and some other vehicles, and added a separate queue to the load balancer for new players.

Improvements to the sniper mode settings for the tank destroyer

Now you can enable and disable the body lock in sniper mode for tank destroyers and some other vehicles with limited horizontal aiming angles. To activate the free movement of the sight, disable the setting in the corresponding menu. In addition, you will be able to enable and disable the lock of the additional turns of the body in sniper mode right in battle using the X key. We have also added new audio notifications for manually enabling / disabling the lockout setting of the case's top-ups.

Improvements to the load balancer: a separate queue for new players

We've tweaked the player selection settings to make it easier for beginners to learn the basics of World of Tanks. Now the load balancer will create a separate queue for new players on the equipment of I–V levels — this will make the game more comfortable for beginners. At the same time, if there are not enough new players to create two full and equal teams, the load balancer will try to assemble a random battle by adding regular players or AI-controlled equipment (if there are few people on the server in the early or late hours).

The AI-controlled technique is easy to identify: the game nickname is always marked with colons in the command lists—: game name:. In addition, there is a special icon next to such cars in the list.
The presence of such machines in battle will be completely transparent. They will only appear in those rare level I–V battles for new players, in which the balancer will not have enough newcomers and/or regular players. 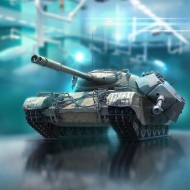