From September 26 to October 10, the "Waffentrager: Legacy" game event will take place, in which you will once again have to fight the formidable Blitzträger auf E 110, the "wunderwaffle" created by the von Krieger family. This time things will be a little different. Instead of the Engineer, the uninvited guests will be welcomed by his daughter Hermelinda and will demonstrate how "hospitable" their family can be. She will be confronted by Alliance forces, represented by a team of six Hounds.

As before, there is no good or bad in this epic confrontation. Participate in the game event and gain the right to break into Random Battles on the legendary Waffenträger auf E 100 PT-SAU!

"Waffentrager: Legacy": Briefly about the event

If you decide to transfer your account to another region, your progress in the event and any in-game items received or purchased will be transferred along with your account. You will be able to continue your progress from where you left off.

These and the other 10 premium vehicles can only be obtained from the Engineer Portal (with a certain probability of falling out). You can also rent the legendary Waffenträger auf E 100 PT-SAU to play in Random Battles!

Game modifications performance during the event

Popular game modifications can cause performance problems during a Waffentrager: Legacy event. To avoid this, play without mods or update them.

How to Start Playing

The Alliance once again hit the trail of the von Krieger family and obtained the coordinates of the base, where a squad of Hounds was immediately dispatched. However, something unexpected happened... Instead of Von Krieger himself, they had to deal with his daughter Hermelinda. But that does not mean that this confrontation is any easier to win!

The squad consists of six Hounds, who will be opposed by the incredibly powerful Blitzträger auf E 110. In the Event Hangar you'll find three special vehicles:

Choose one of these vehicles and press the "Fight!" button to fight Hermelinda's incredibly powerful battle monster!

Hounds can be revived in battle an unlimited number of times, but each subsequent revival will take longer and longer. If the Hounds' vehicle carrying the plasma blob is travelling at over 50km/h, the plasma meter will slow down. Use this to deliver plasma faster and increase your chances of victory!

Complete the Hounds' tasks to get the stamps you need to fill your progress bar, as well as the keys to play the Blitzträger auf E 110. For completing some of these tasks, you will receive Hound starters that allow you to launch the Hound portal.

To go into battle on the powerful Blitzträger auf E 110, the player will need a special key. It can be obtained in several ways.

The keys will also be available as gifts in the Premium Shop during the game event.

* If the waiting time for a battle drags on or there are not enough Blitzträger machines in the queue, the balancer can offer you to play the Blitzträger auf E 110, even if you do not have the keys.
There will be no compensation for unused keys after the game event ends on October 10 at 12:00 p.m. (MSK).

By completing Engineer tasks you will be able to earn Engineer stamps and starters.

The initial combat time is 5 minutes, but this can be extended to 15 minutes using the overtime mechanic, which can be activated once per combat. If at least one Hound car has plasma, the duration of the battle will be increased by the time remaining before it disappears (if the overtime mechanic was not activated earlier).

What happens if at least one Hound car has Plasma?

The Blitzträger auf E 220 has the same characteristics as the E 110, but is distinguished by its unique camouflage, which makes it easy to distinguish. This machine can only be unlocked by some Lesta Games employees and popular bloggers. You can encounter it in combat on special days.

If you and your team manage to defeat the E 220, you will receive a special medal and one Engineer starter. Read a special article with details about the big E 220 hunt, including a list of participating bloggers and a schedule of prime times!

** To complete the progress bar and receive all game event rewards, you must play as both Hounds and Hermelinda. If you miss a few tasks or only start playing in the middle of an event, it will be difficult to catch up and get the legendary Waffenträger auf E 100.

Complete special game event tasks and earn stamps, which will gradually fill up the progress bar. The progression system consists of 20 stages, and you'll need 20 stamps to complete each stage. On the progression screen you will see how many more stamps you need to earn to complete the stage and receive your reward.

For achieving each new stage, you'll receive game values, including:

But most importantly, at the end of the final 20th stage, you will have the opportunity to rent the legendary Waffenträger auf E 100 PT-SAU to play in five Random Battles!

You will get the very same legendary "Waffräger", a level X German PT-SAU that was withdrawn from the game in 2016. If you played on this formidable machine at the time, your stats will be counted in all Random Battles. You can also get additional fights on the Waffenträger auf E 100 as a reward (with a certain chance of falling out) from the Engineer Portal.

Playing the Waffenträger auf E 100 as part of a platoon will not be available.

*** You will have the opportunity to play available battles on a rental Waffenträger auf E 100 even after the end of the event, until October 18, 03:00 (MSC). After that the legendary vehicle will be deducted from your account. Uncompleted battles will not be compensated.

There are two additional daily challenges available for those who complete all 20 steps of the event progression. For completing them you will receive a Houndstalker starter and a key to play the Blitzträger auf E 110.

For completing the event tasks, passing certain progression stages, and defeating the rare Blitzträger auf E 220, you will receive two types of starters needed to launch portals. In the launched portals you will find valuable rewards.

By playing on Hound vehicles, completing event tasks or reaching certain progression milestones, you will have the opportunity to earn Hound starters. They will allow you to launch a Hounds portal and be guaranteed a reward from the list below:

In addition, you will have the opportunity to obtain appearance elements that were available as part of previous game events in the Waffentrager series.

For completing tasks when playing the Blitzträger auf E 110 you will receive Ingenier starters. You need them to start the Engineer's portal.

You can get Engineer starters after completing certain progression stages and from special kits in the Premium Shop.

* When you launch the Engineer Portal, you can get in-game items in four different categories, each with a different chance of being dropped. First and foremost, you will receive a guaranteed reward from the list below:

If luck smiles on you, there is a 5% chance you can get an impressive 3D style of Hounds for Object 140, Bat.-Châtillon 25 t or M48A5 Patton. Each 3D style can only be dropped once.

However, the most coveted reward will be rare premium vehicles of levels VIII and IX, including new vehicles: FV4201 Chieftain Proto and KV-4 KTTC.

In addition to these formidable machines, you have a 2.4% chance of getting the premium vehicle you don't already have from the list below (and a slot in the Hangar with it)

*** There will be a special counter in the game client until guaranteed to get the machine. Each time you get a premium vehicle it will be reset to zero. After getting all possible machines the counter will become unavailable.

Engineer Portal: How it works

Mechanics of a Guaranteed Machine

If you already have all of the vehicles from the list above in your Hangar, the guaranteed reward mechanic will be disabled.

In the event "Waffentrager: Legacy" there will be a reward replacement mechanic, thanks to which you can replace your current reward. Each replacement is accounted for by the guaranteed machine mechanic and brings you one step closer to receiving premium equipment.

The Hound Portal can be restarted up to three times per credit.

The Engineer Portal can be restarted up to five times for gold.

Replacement rewards will not be available if premium equipment or compensation in gold is dropped from the Engineer's portal.

Hermelinda Jung and her Alliance counterpart, Villanelle Rapier, are ready to join the ranks of your vehicle commanders! You will be able to recruit these unique crew members with an exclusive voiceover upon completion of certain stages of the game event. They have learned the "Battle Brotherhood" skill (as "zero"), as well as enough experience to learn three more skills or skills of your choice.

None of the crew members are tied to the game nation, so you can place them in any vehicle in your Hangar. Initially they can only be recruited as commanders, but later their basic specialty can be changed for gold.

**** After re-training from commander to another specialty, the unique voiceover will not be available. However, it will be present in battles again when re-trained as a commander.

Four special sets will be available during the game event. In these you will find free keys to play the Blitzträger auf E 110. In addition, each set contains a certain number of themed event decals to decorate your equipment, as well as the Engineer starters (as a bonus) to run the Engineer portal.

What happens to the keys and starters after the game event ends?
When the event ends on October 12 (12:00 PM MSK), all unused keys for the Blitzträger auf E 110 game will be written off and the corresponding number of portals will open automatically. All rewards from them will be credited to your account. All event machines will be written off, and the experience earned on them will be transferred to the MS-1 tank. All collection items, rewards and items from the portals will remain with you. You will have the opportunity to complete your available battles on a rental Waffenträger auf E 100 until October 18 (03:00 MSK).

If you decide to transfer your account to another region, your progress in the event and any in-game items received or purchased will be transferred along with your account. 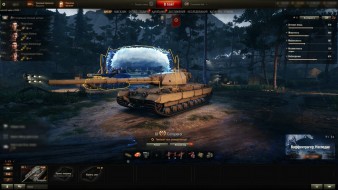 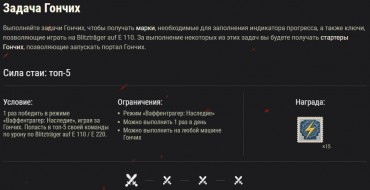 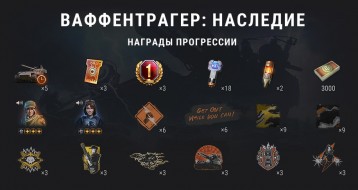 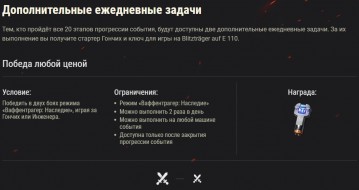 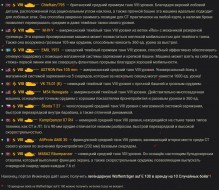 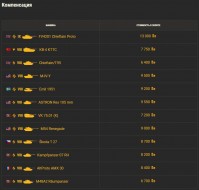 This time you will be up against Max von Kriegger's...

World of Tanks does not start after update on September 22

On September 22, a minor update to the game was released,...

Patchnote of the third general test update 1.18.1 in World of Tanks

As said, the main imbue of the last patch was not the...

Onslaught 2022: Rating system and rewards in World of Tanks

Recovery of sold tanks that can drop in Waffentrager: Legacy World of Tanks