Onslaught 2022: Rating system and rewards in World of Tanks

In the previous article we told you about the gameplay mechanics of the "Onslaught" mode, and now let's get into the competitive side of the new game event. The Gryphon season will run from October 12, 11:00 a.m. (MSC) to November 21, 01:00 a.m. (MSC). During this time period, players will earn ranking points to advance through the divisions and up the ranks. With each new position on the leaderboard, you will move closer and closer to the highest rank, Legend, and the most valuable rewards.

"Onslaught" is a new competitive mode. Unlike Random Battles, in which the composition of the team depends on the selected vehicle, "Onslaught" battles involve X level combat vehicles of players of the same rank.

The Combat Balancer takes into account each player's rank to select opponents with a similar position in the ranking system. In other words, the battles will be attended by teams of tankers, formed on the basis of the achieved rank, division and the number of rating points earned. Thus in the battle for the titles of the best teams will meet equal in strength and skill.

The number of rating points a player gains or loses after the battle depends on the outcome of the battle and its results. The system evaluates the contribution of each player based on the earned prestige points and compares it to the average performance of the team. Prestige points are awarded for active actions during a battle.

In case of winning a battle:

In case of a draw or a loss in a battle:

Players are guaranteed to lose a significant amount of rating points for deserting or taking no action in combat, regardless of the outcome of the combat.

You have three different ways to engage in combat in Onslaught mode.

A super platoon consists of seven players and can take part in "Onslaught" battles as a complete team.

Platoon of two players: the difference between the values of rating points among the players must not exceed 350.

Seven-player Super Platoon: the difference between the highest and lowest ranking points
of the players may not exceed 500.

Players may choose the same combat vehicles as their teammates, and there are no restrictions in terms of vehicle classes.

In Onslaught mode, players will be able to communicate with their teammates and coordinate tactics via voice chat.

This feature is disabled by default. To join, press the "H" key (by default) or the "Activate voice chat" button in the interface. If a player is present in the voice chat, he will be marked by a special icon.

Ranks of the "Onslaught" mode

There are a total of seven ranks in competitive mode:

Each of the five main ranks (Debutante to Gold) is divided into four divisions (D, C, B, and A). All players start in the D Division at the Debutante ranking. As you earn rating points, you will gradually move from division to division until you reach the Gold rank. You will need at least 800 rating points - 50 points for advancing to the next division. Don't forget, ranking points can be earned for wins and lost for losses, draws and defections.

Promotion to the Champion and Legend ranks is different: these ranks include only one division and do not require any specific number of rating points. There is only one rule: players who are in the top 10% of the leaderboard by rating points are automatically promoted to the rank of "Legend".

Only Champions and Legends are displayed on the dynamic Onslaught leaderboard in the game client.

Players ranked Silver or higher will lose ranking points for prolonged inactivity. When a player falls into one of these four ranks, each battle brings them a certain number of activity charges. Players will receive these charges regardless of the outcome of the battle, but they will not be awarded to those who do not act or receive an early exit penalty.

Please note: the number of charges in the Activity Reserve may not exceed 14, and a depletion system of 1 charge per day applies. If a player has no activity charges at the end of the game event day (01:00 MSK), he will lose some rating points depending on his rank.

Thus, a player with a full Activity Reserve has 14 days to resume play before some of his rank points are lost. And rank inactivity for an extended period of time will lead to relegation to Division A at the Bronze rank.

* The rank inactivity system allows players to take a break, and at the same time keeps the competitive spirit up until the end of the Onslaught mode. Players must continually participate in mode battles in order to maintain their earned position on the leaderboard and earn the most valuable rewards.

Progression Rewards.
- Victory Rewards.
The second line of rewards includes boons, credits, equipment, personal reserves, gear, and more. Players have eight stages of progression based on the number of wins in "Onslaught" mode. Players must achieve a certain number of victories to pass a stage and earn rewards.

** Playing in "Onslaught" mode will also allow you to earn Battle Pass points.

Quitting a battle prematurely or doing nothing can cause significant discomfort to your allies. That is why disciplinary penalties exist - to prevent unwanted behavior and to punish players who worsen the position of the team in battle.

In the following cases, the player will be penalized with a penalty in rating points and a temporary blocking:

*** Please note: You will lose more rating points for quitting a battle prematurely than for the most unsuccessful battle. If you defect repeatedly, the duration of the lock will increase. 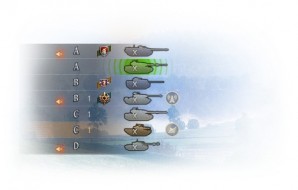 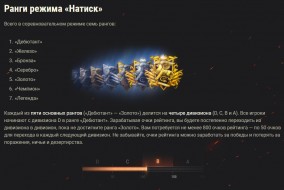 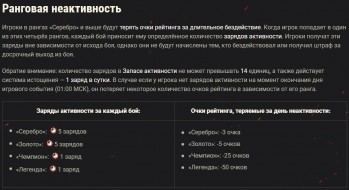 Patchnote of the third general test update 1.18.1 in World of Tanks

As said, the main imbue of the last patch was not the...

Recovery of sold tanks that can drop in Waffentrager: Legacy World of Tanks